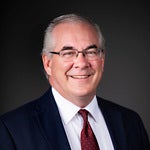 After serving as a Circuit Court Judge for the Third Judicial Circuit in South Dakota, Vince retired to return to Watertown and rejoin his father in the practice of law started by his grandfather. Having served as the Codington County State's Attorney, and the City of Watertown, City Attorney, Vince possesses the breadth of experience in the court room, and as a former owner of a title company, he brings that real estate knowledge not found in many law firms.

As a Watertown High School graduate in the class of 1980, Vince then graduated from the University of Notre Dame in 1984 before completing his legal education at the University of South Dakota School of Law in 1987. Following graduation Vince served as a law clerk for the Chief Judge of the District of South Dakota, Donald J. Porter. At the end of that term, Vince returned to Watertown to enter the private practice of law with his father, John. For the next eighteen years, he practiced with his father, as well as serving as the City Attorney, and State's Attorney in a part-time capacity.

Before joining the bench in January of 2007, Vince served the profession and community as the Inaugaral Chairman of the Open Meetings Commission, having been appointed by Attorney General Larry Long, for which he received the Eagle Award from the South Dakota Newspaper Association. He also served the profession on the Real Property, Probate and Trust Section, including service as Chairman. He also served on the drafting committee for the initial version of South Dakota's limited liability company (LLC) state statues. Moreover, he has presented to State Bar through its Continuing Legal Education programs on both Limited Liability Companies (LLC) and South Dakota's enactment of the Uniform Probate Code.

Thank you for contacting us. We will get back to you shortly.

Please complete all required fields below.